I’ve been sitting on this for a while.

A few years ago, our colleagues down New Mexico way sent us a little gift. The husband and wife team of Bob Alexander and Jan Devereaux were engaged in their own research — in this case, regarding the husband and wife team of Frank Thurmond and Carlotta “Lottie Deno” Thompkins, gamblers of the Wild West and associates of the Blongers — when they came across a photo they thought might be of interest to us. Here it is. 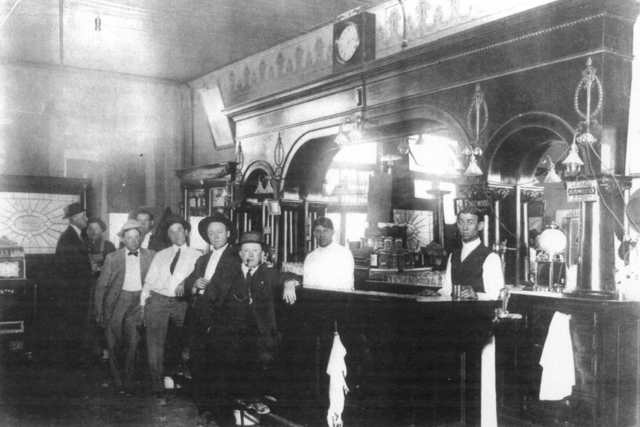 This is the Cabinet Saloon, in Deming, New Mexico, if I recall correctly. The year is indeterminate; we can see electric lighting, with wires strung rather haphazardly over the bar; to the left there is what appears to be a vending machine. Some of the clothing appears to post date the Wild West. Turn of the century, perhaps? 1910? I’d like an expert opinion.

But the big question is, who are these men? Specifically, who are those four gentlemen at the bar? Let’s have a closer look. 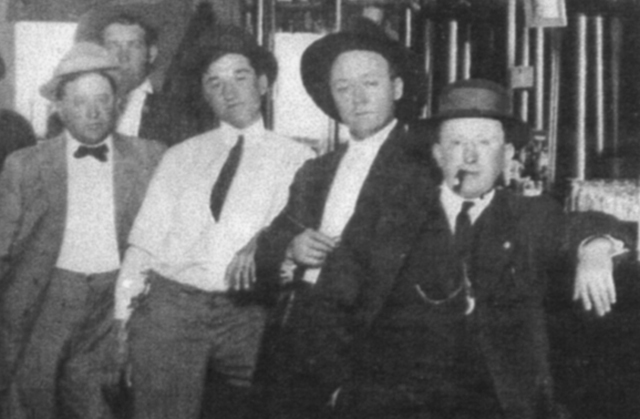 The elephant in this room, of course, is the short gent with the cigar. Could it be? Scott is dubious, but I’m inclined to believe it’s Lou. Wishful thinking?

First off, Lou was well acquainted with southern New Mexico, not to mention Thurmond and Thompkins, who eventually settled in the Deming area. They were all renowned sports and professional gamblers in the style of your Earps, your Hollidays, your Mastersons, and frequented the same locales  — that is, anywhere that miners, cowboys and tinhorns would gather to throw away their cash.

What’s more, in a pension document dated 1887, Lou told the government the following:

Since 83 until the present time here resided with Frank Thurmond at Silver City, Deming and Kingston New Mexico.

We assume that when he says he “resided with” Thurmond, he means in the hotel Thurmond ran at the time.

And he certainly seems to share Lou’s sartorial sensibility.

So what can we glean from the minimal information we have to go on? Perhaps a comparison is in order.

The picture on the left might represent Lou in his forties or fifties, the second two are Lou in his seventies. We have no photos of Lou earlier than that on the right, taken about 1915, when he would have been 66.

This is hardly science, but let’s see what happens if I gradually lay Lou’s mugshot over the face in question.

Interesting, but inconclusive. I’m biased, but I don’t see any glaring physical discrepancy between the two.

But what about the others? To my eyes, the young man in shirt sleeves appears to be an employee; no jacket, garters on his arms, his tie tucked in, he appears to be taking a break, from a gaming table, perhaps, to pose with some visitors. Guests of some celebrity?

The fellow on the left of the saloon photo is a bit more interesting. Honestly, if cigar man wasn’t in this photo, I could easily be persuaded that HE was Lou. Here’s another comparison:

See what I mean?

In my dreams, here’s what I see…

Lou, Sam and kid brother Marvin visit the Deming area, and drop in to a local saloon for a visit. A picture is taken, with a croupier anxious to pose with the Famous Blonger Brothers.

Marvin? We have no photos of him. It’s easy to imagine, though, that Marvin resembled Lou. And Sam? Again, no photos (such a shame). We know he was a fairly imposing man, and perhaps as tall and lean as Lou was short and hefty.

It’s an enticing possibility. As I said, Scott takes a more factual approach. I’ve always been more inclined to conjecture — but then, I love to do it. And where’s the harm?